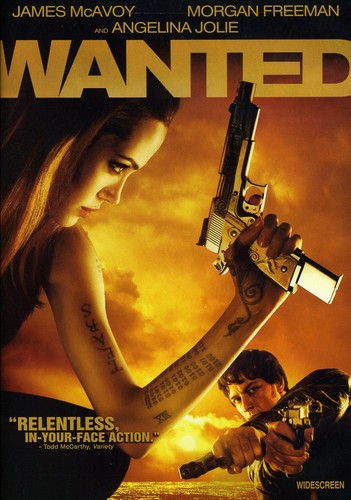 Wesley's (James McAvoy) life is over--his pathetic old one, anyway, and it's all because of a girl. Sizzling-hot Fox (Angelina Jolie) crashes into his life, introducing him to The Fraternity, a secret society of assassins led by the enigmatic Sloan (Morgan Freeman). Wes has been selected to target the rogue member who murdered his father.

Russian director Timur Bekmambetov solves the problem of adapting comic books with his mirthfully anarchic Wanted. Where classic and beloved series such as the usual superheroes or Watchmen require a religious reverence to the source material when translated to the screen, Wanted is based on Mark Millar and J.G. Jonesâ€™ six-issue comic miniseries about a fraternity of super assassins and the young man it recruits. Screenwriters Derek Haas and Chris Morgan, though, take that storyline as a mere suggestion. Best of all, director Bekmambetov creates one of the most ludicrous worlds for the story, an American city populated by generic office drones in which these assassins can curve bullets and other impossible feats of physics. These visual flourishes turn Wanted into a non-stop orgy of ludicrous action sequences and absolutely pointless violence, a movie that would be cynically nihilistic if it werenâ€™t such a preposterous good time.

Wesley Gibson (James McAvoy) is a typical American cubicle worker, stuck at a job he loathes, living with a woman who doesnâ€™t respect him and palling around with an office mate who services Wesleyâ€™s gal during lunch. Wesley is such a post-industrial dweeb he pops pills to abate the pulse-pounding spells he mistakes as panic attacks, which are actually adrenaline spikes that only a few human beings experience. Itâ€™s a congenital condition that Wesley could turn into deadly skills if he only knew how to harness it.

Fox (Angelina Jolie), Sloan (Morgan Freeman), and the rest of the assassin crew want to teach Wesley to do just that. Turns out Wesleyâ€™s father belonged to their brotherhood, a Fraternity of Weavers turned assassinsâ€”not kiddingâ€”started centuries ago to maintain balance in the world. They get their assignments from the Loom of Fateâ€”again, not kiddingâ€”and mete out this karmic justice with the stoic sobriety for which cinematic assassins are known. They just do it by, you know, flipping a car through the air to shoot a businessman through his limousineâ€™s open sunroof, or curving a bullet through a window from a moving train. And the Fraternity wants Wesley because they believe heâ€™s the only man who can track the rogue assassin whoâ€™s picking off their members one by one, the man they say killed Wesleyâ€™s father.

Of course, all is not right in the state of weaver assassins, and Wanted doesnâ€™t take anything about itself too seriously. Better yet, Wanted isnâ€™t driven by the fate of the world or humanity writ large, instead anchoring its charactersâ€™ motives in reliable human foibles such as vanity and greed. Wanted isnâ€™t going to enrich the mind, but itâ€™s hard not to giggle along with a movie that begins its climatic action sequence with a garbage truck full of explosive rats.