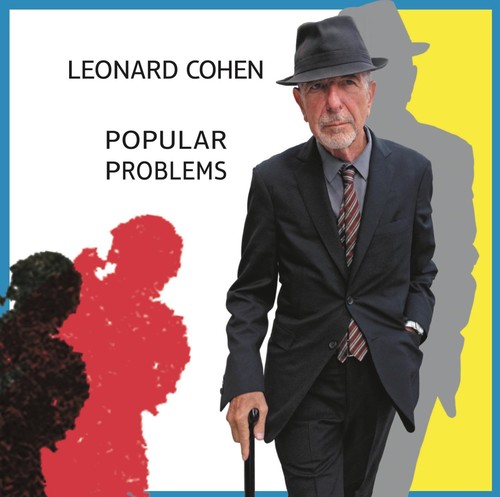 Popular Problems is Leonard Cohen's thrilling new studio album, where he takes us down into the avenues of our dreams and sets a new tone and speed of hope and despair, grief and joy. Cohen here is an astonished lover rocking to the human condition as "the soul unfolds in the chambers of its longing." His legendary basso resonates as never before with a presence and urgency that arises from the very the depths of the heart. The clarity and strength of these nine hypnotic songs will have us singing them over and over.

Leonard Cohen is a master songwriter, musician, poet, novelist and visual artist whose stunning body of original work has touched the lives of millions with a career spanning six decades. His explorations of spiritual, interpersonal, romantic and political themes have impacted countless contemporary recording artists and writers. He has sold over 23 million albums, worldwide and published 12 books, the most recent of which was 2006's 'Book of Longing', a collection of poetry, prose and drawings, which reached #1 on the Top 10 Hardcover Fiction Books in Canada.

Cohen's influence on musical and theatrical artists the world over is inestimable. In fact, when Cohen was inducted into the Rock & Roll Hall Of Fame in March 2008, the revered Lou Reed singled out Leonard as one of the "highest and most influential echelon of songwriters." Cohen's songbook has been covered by hundreds of recording artists including Jeff Buckley, Bob Dylan, Nina Simone, Johnny Cash, Lou Reed, Tori Amos, Nick Cave, Joan Baez, Harry Belafonte, Rufus Wainwright and the Civil Wars. Tribute albums have been released in Cohen's honor in France, Norway, Canada, Spain, Swedish, Czech Republic, South Africa and the United States. In 2008 Cohen's "Hallelujah" became the fastest-selling digital single in European history when three separate versions of the song appeared simultaneously on the UK singles chart - Cohen's own original recording, a version from Jeff Buckley and another from X Factor winner Alexandra Burke. Additionally, Leonard's songs have been frequently selected to illustrate the emotion of motion pictures and television programs and have been heard in Watchmen, The Passion of The Christ, Natural Born Killers, The Wonder Boys, Pump Up The Volume, Secretary, The West Wing, The O.C. and many others.

Leonard Cohen has been honored as a Grammy Lifetime Achievement Award Recipient (2010), inducted into the Rock & Roll Hall Of Fame (2008), the Canadian Music Hall Of Fame (2006), the Canadian Songwriters Hall of Fame (2006) and the Songwriters Hall Of Fame (2010). He has received the prestigious Principe de Asturias Prize the highest literary award in Spain (Spain, 2011) as well as the Glenn Gould Prize, awarded to an individual for a unique lifetime contribution that has enriched the human condition through the arts (Canada, 2011). The Canadian native has earned his country's highest civilian honors - Officer of the Order of Canada (1991), Companion to the Order of Canada (2003), Grand Officer of the National Order of Quebec (2008).