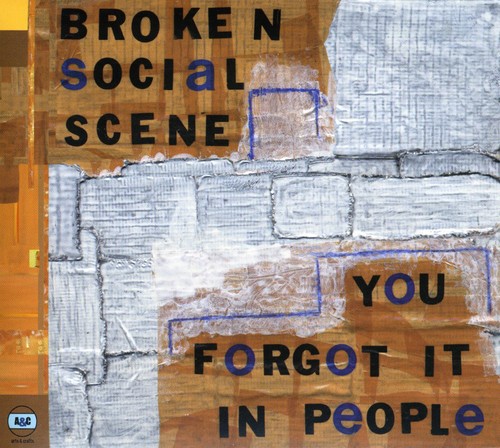 For those with a taste for obscure pop, Broken Social Scene's YOU FORGOT IT IN PEOPLE is the perfect forward-thinking pop for you. This album melds "outright experimentation and strong hooks - Pitchfork Media" "One of the most unpredictable, well-rounded and completely satisfying strokes of rock n roll genius.

Music videos were made for a number of tracks, including singles "Stars and Sons", "Almost Crimes", "Pitter Patter Goes My Heart", and "Cause = Time". The album also features "Anthems for a Seventeen Year-Old Girl" and "Lover's Spit", two songs that went on to become the band's biggest "fan favorites."

Many of the songs that didn't make it onto the album were featured in a B-sides compilation titled ''Bee Hives'', released in 2004. - Wikipedia

It's been awhile since anyone came up with a simple yet somehow irresistible bassline on par with Peter Hook, who set a rock standard with Joy Division and New Order. On Broken Social Scene's meandering pop blast "Stars and Sons," Charles Spearin's ascending bass loop extends the length of the song, moaned and slurred over by singer Brendan Canning. It's a rare band that'll emphasize an instrument over a vocalist, but then the vocalist in Broken Social Scene is horribly outnumbered. The Canadian ensemble's disc lists 10 regular members, and another five guests playing un-rock things like saxophones, flutes and violins. The obvious comparison is to Montreal's similarly staffed Godspeed You Black Emperor!, but this Scene is more intent on poking around rock's edges from the inside.

Within the space of a few tracks, the band dabbles in tropicalia ("Pacific Theme"), country and electronics ("Anthems for a Seventeen Year-Old Girl") and Pavement-style indie rock ("Cause=Time"). On another track, they go completely metal, titling the meandering guitar-and-cheap-keyboard-laced song "Late Nineties Bedroom Rock for the Missionaries." It's an ambitious scope, and the band sounds confident at every turn. Unfortunately, the individual songs don't hit many exciting crescendos, save the opening one-two punch of the ambient "Capture the Flag" and the explosive "KC Accidental," and of course there's the bassline from "Stars and Sons." Overall, an impressive album, but one that doesn't entirely dispel the rumor that this band's better experienced live-where they consistently hit highs.