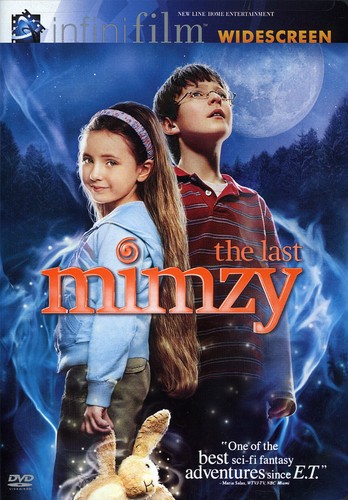 Step into a world where a child holds the power to alter the future of all mankind in the magical family adventure The Last MImzy. Noah and his little sister Emma discover a box of unusual toys that includes a magical stuffed rabbit named Mimzy. The kids soon realize that Mimzy is trying to get them to use these"toys"for a far greater purpose.

Two kids find a bizarre box on the beach and are soon exhibiting signs of off-the-chart genius in this gently mind-blowing fantasy film. Little Emma (Rhiannon Leigh Wryn) finds a cute bunny doll in the box, who talks to her in electronic code, and Noah (Chris O'Neil) learns to speak in a frequency that lets him control spiders. The kids learn to move objects via psychokinesis and communicate telepathically. Naturally, their parents (Timothy Hutton and Joely Richardson) wonder what is going on here.

Noah's science teacher (Rainn Wilson) has dreams predicting all this, centered on a mandala symbol from ancient Tibetan Buddhism, which Noah draws in class. Michael Clarke Duncan is suitably dour as the Homeland Security official who investigates when the kids' newfound power creates a major blackout across Seattle. Parents who cringe at the vulgarity of many kid films will certainly appreciate LAST MIMZY's sweet-natured awe towards the natural world and its inhabitants, which comes without extraneous action or excessive musical bombast.

The film moves with a poetic grace, calling attention to environmental and social problems without preaching, and creating the possibility for a genuinely better world. The child actors are real naturals who are allowed to talk and sound like kids, and car chases and explosions are all but absent in place of genuine mystery and excitement about human potential. It's rare to find a sci-fi film that makes the future seem worth saving, so consider this one a true gem.
This website uses cookies to personalize content and analyse traffic in order to offer you a better experience.
I accept Learn More
back to top