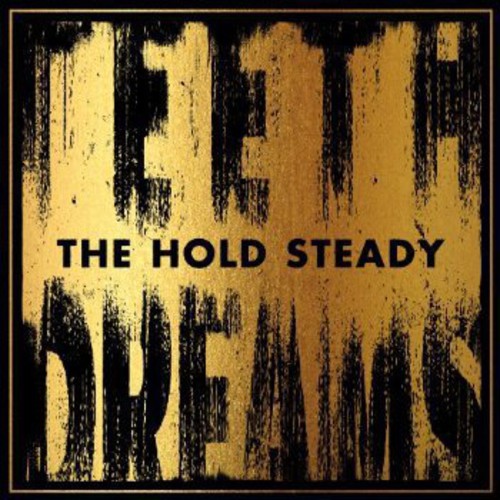 Teeth Dreams is the sixth album from one of America's most acclaimed rock bands. This is their first release in four years. Their last, Heaven is Whenever, came out in May 2010. The songs on Teeth Dreams came together over the past three years. Many of them went through significant changes along the way. Four years is the most time between any two The Hold Steady releases.

Guitarist Steve Selvidge joined The Hold Steady for the Heaven is Whenever tour. Teeth Dreams is the first THS release where Selvidge participated in the writing and recording. A number of the songs were written at sessions in Memphis, where Steve lives.

The album was produced and mixed by Nick Raskulinecz. Nick has produced records by Foo Fighters, Rush, Alice in Chains, Deftones, Ghost and more.

Teeth Dreams was recorded and mixed at Rock Falcon Studios in Franklin,TN. It is the first record that THS has made outside of the NYC area.

This five-piece line up (two guitars, bass, drums, vocals) of the band showcases a bigger and tougher sound. The guitars are especially present on this release.

This is the first release on the band's own Positive Jams imprint, which is in partnership with Washington Square/Razor & Tie.

The title Teeth Dreams refers to a common nighttime dream. Dreams about teeth are usually triggered by anxiety. Anxiety is a theme that shows up in a number of songs on the album.

The band recently launched an official fan club called The Unified Scene, and released a five song covers EP to the members of the club.

The Hold Steady played their first show in 2003. They are entering their second decade as a band. The Hold Steady has been cited as influential by numerous rock acts such as Japandroids, Titus Andronicus, Frank Turner and many others.

THS has toured heavily, and has played at least one show in all 50 states. They achieved this in summer 2013 when they played a show in Wyoming, the last state on their list.