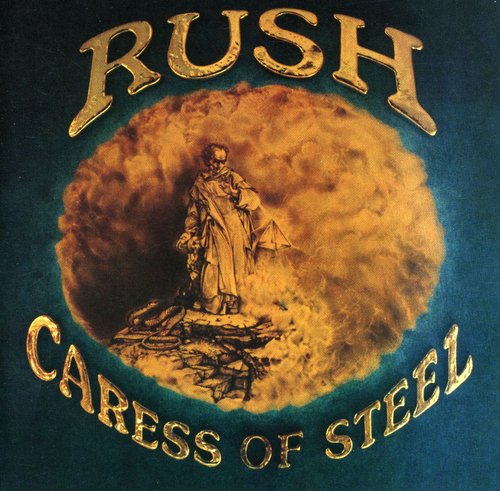 Features 20-bit remastering from the original master tapes and enhanced packaging faithful to the original LP release. Tracks include: "Bastille Day," "The Necromancer," "Into Darkness," "Under the Shadow," "No One at the Bridge," "The Fountain" and much more.

''Caress of Steel'' is the third studio album by Canadian rock band Rush, released in 1975. The album shows more of Rush's adherence to the hard rock and progressive rock styles of the band's first two albums. Long pieces, pieces broken up into parts, and solo passages of speed and agility are all included. The album is often considered notable for the inclusion of the band's first two epic pieces, "The Necromancer", and "The Fountain of Lamneth", which runs to nearly 20 minutes and comprised the whole of side two of the original vinyl release.

Intended to be Rush's breakthrough album, it sold fewer copies than their previous record and was considered a disappointment by their record company. The subsequent tour became known by the band as the "Down The Tubes Tour", as they feared the album's poor sales might mean the end of their career.

The album was certified Gold by the RIAA in 1993. The next year's follow-up album, ''2112'' would pave the way for Rush's commercial success with its own 21-minute epic.

Originally, the album cover was supposed to be in silver hue to give it a "steel" appearance. A printing error resulted in a copper color for the album cover.

Some cassette printings of this album had "Didacts and Narpets" and "I Think I'm Going Bald" switch places (possibly because of cassette tape length and to balance out both sides), and all of the movements of "The Fountain of Lamneth" listed as separate songs. - Wikipedia