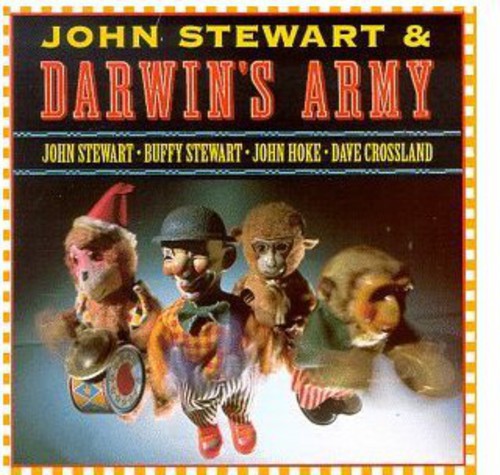 In the 30 years between leaving the Kingston Trio in 1968 and recording this CD, singer-songwriter John Stewart has played with many fine backing musicians on stage and in the studio. But Darwin's Army was Stewart's first real group effort since the Trio, positioning himself as chief among equals in this project spotlighting many classic folk songs, both traditional and contemporary. 'I missed singing in a group, missed being one of three or four people singing together,' Stewart explains. 'Certainly this is a sound I personally wanted to get back to.' So Stewart recruited wife and longtime singing partner Buffy Ford Stewart and rising young singer-songwriter-musicians Dave Crossland and John Hoke to tackle material as old as 'Wild Mountain Thyme' and 'Twelve Gates to the City,' as nouveau classic as Bob Dylan's 'My Back Pages' and Tim Hardin's 'Reason to Believe,' as surprising as 'Somewhere Over the Rainbow' and 'They Call the Wind Mariah,' and as recent as Paul Simon's 'Boy in the Bubble,' Crossland's 'Blood in the Fields,' and Hoke's 'Dreamland.' 'The origin of a lot of the songs goes back to the Weavers and Pete Seeger,' says Stewart, which helps explain why John broke out his banjo for some of the tunes, while adding his guitar and bass to others. Hoke contributes guitar and percussion, Crossland plays guitar, and Ford sings backing vocals and the occasional lead, as do Hoke and Crossland. The quartet spans generations and musical boundaries with it's renditions of songs old and new, with each cover version unlocking a fading memory of the original and appending an energetic freshness. 'We've been told that it's not folk,' explains Ford, regarding the newer songs. 'Some people believe that unless it's a classic old song, it's not folk. That's bull. Folk music is written every day. Folk music grows.' About the Artist To the baby-boomers of the Fifties, John Stewart's name is synonymous with the Kingston Trio, whose early Sixties hits 'Tom Dooley' and 'Greenback Dollar' brought folk music out of the coffeehouses and onto campuses, concert halls and radio playlists. To mid-Sixties teenyboppers, John Stewart was the pen behind the Monkees' #1 hit, 'Daydream Believer.' To rock fans in the Seventies, John was that friend of Fleetwood Mac's Lindsey Buckingham who scored a hit single ('Gold') co-produced by Buckingham, and a Top 10 album that featured Buckingham and Stevie Nicks as guest musicians. To country fans in the Eighties, John is the author of Rosanne Cash's version Number One hit, 'Runaway Train.' Most enduringly, to fans of the singer-songwriter movement that began at the end of the Sixties and has expanded into the Americana and alt. Country genres, Stewart is a figure of uncompromising talent and integrity. Born in Southern California in 1939, Stewart wrote his first song at age 10. After outgrowing his high school rock band, Stewart turned his songwriting and performing skills to folk while he was in college, and two of his compositions were recorded by the Kingston Trio, riding high on their pop-folk hits. At the urging of the Trio's manager, Stewart moved to San Francisco and formed the Cumberland Three, a Trio-styled group that recorded an album for Roulette. When founding member Dave Guard left the Trio in 1961, John was his logical replacement, providing banjo, guitar, on-stage humor and, most importantly, original material. The Trio recorded more than two dozen Stewart compositions during his seven-year tenure with them, including 'One More Town,' pegged by Paul Simon as the inspiration for his own 'Feelin' Groovy.' During his final days with the group, he wrote 'Daydream Believer,' which became a worldwide hit for The Monkees and, years later, for Anne Murray. With folk music as the soundtrack to activism in the Sixties, John took part in the March for Freedom in Selma, Alabama, and also joined his friend Robert Kennedy's Senatorial campaign. In 1968, Stewart again stumped for Kennedy, this time in the latter's tragically curtailed run for the U.S. presidency. That same year, Stewart left the Trio after a 16-album stint and recorded Signals Through the Glass with his wife-to-be, Buffy Ford Stewart. The following year, Stewart went to Nashville to record his first solo album, California Bloodlines, later chosen as one of the 200 Best Albums of All Time by a Rolling Stone critics' poll. More solo albums and more cover versions of Stewart songs followed; John's songs have been recorded by everyone from Harry Belafonte and Pat Boone to Joan Baez and Nanci Griffith, from the Four Tops and the Lovin' Spoonful to the Violent Femmes and the Beat Farmers. In 1979, John returned to the charts himself with 'Gold,' a Top 5 single from his Top 10 album Bombs Away Dream Babies, co-produced and played on by longtime Stewart fan and Fleetwood Mac leader Buckingham. The album spun off two more Top 20 songs, but the lack of sales for it's successor led to a parting of the ways between John and his record label. Since the start of the Eighties, John has been releasing live and archival tracks on a variety of labels. In 1999 he briefly formed his first group since leaving the Trio, John Stewart & Darwin's Army, for an album of mostly folk-oriented classics on Appleseed, which continues to issue new Stewart material.
This website uses cookies to personalize content and analyse traffic in order to offer you a better experience.
I accept Learn More
back to top