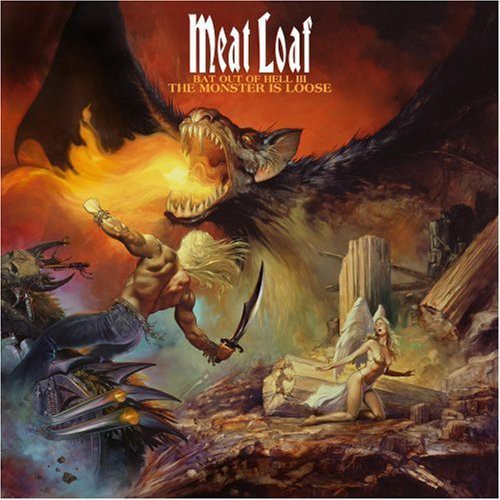 Bat Out of Hell III is produced by Desmond Child (Kiss, Bon Jovi, Aerosmith) and includes contributions by Jim Steinman and Todd Rundgren, the composer and producer, respectively, of the original Meat Loaf classic Bat Out of Hell. The new album features Meat Loaf's version of"It's All Coming Back to Me Now,"the Jim Steinman rock classic that was a worldwide hit for Celine Dion in 1996.

Produced by Desmond Child, it is the only ''Bat'' album not involving Jim Steinman in its production. The album was subject to a legal dispute between Meat Loaf and Steinman, who had registered the phrase "Bat Out of Hell" as a trademark and attempted to prevent the album using the phrase. In the end, seven songs that Steinman wrote for various other projects were included.

As with its predecessors, the album received mixed reviews. A tour, named "Seize the Night tour," followed the release, concentrating upon songs from the ''Bat'' albums. - Wikipedia

"Another Bat Out of Hell?" you chuckle, checking the calendar to verify that this is, in fact, 2006. And Marvin Lee Aday, checking his wallet to verify that 45 million fans, in fact, have dropped a tenner on the last two Bats, chuckles right along with you. Nearly 30 years after bowling alleys everywhere found their national anthem in "Paradise by the Dashboard Light," the Loaf and longtime collaborator Jim Steinman learned to play nice, settling their trademark dispute over the title and divvying up those gazillions accordingly. With the power couple back in cahoots, an appropriately insane array of songwriters was corralled for III, from Diane Warren to Nikki Sixx and ex-Marilyn Manson guitarist John 5. In keeping with the, um, hellacious theme, the first single is "It's All Coming Back to Me Now," originally written by Steinman for Bat II, then cast off to a little devil named Celine Dion. Now settled, M. Loaf's epic legal battle with Jim Steinman over the rights to the Bat Out of Hell franchise is the stuff of legend. (Hey, nobody said legends had to be especially interesting.) Here, he shows Celine what bombast is all about with "It's All Coming Back to Me Now."
This website uses cookies to personalize content and analyse traffic in order to offer you a better experience.
I accept Learn More
back to top