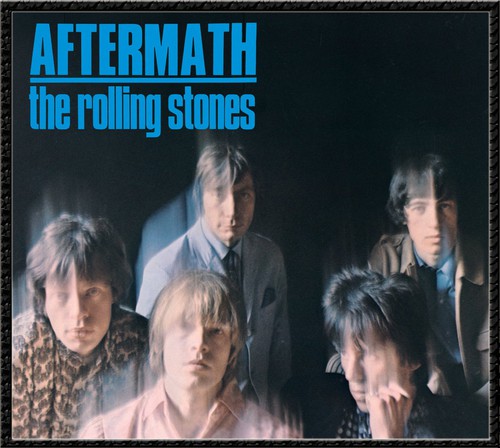 Remastered 11 song USA version of their classic 1966 album with different cover artwork than the British version. Tracks were recorded during two three day marathon sessions at RCA in Hollywood in December 1965 and March 1966. The album opens with "Paint It Black", which spent two weeks at number one in the summer of 1966. The cohesion and overall sound and feel of the album was in no way harmed by the inclusion of "Paint It Black" as it was recorded at the same March 1966 session in Hollywood as much of the rest of the album. Bill plays the bass pedals of a Hammond B3 organ by pummeling them with his fists and Brian plays sitar, both of which add to the unique sound of this standout track. Other key tracks include "Lady Jane", "Under my Thumb" and "Stupid Girl". Jack Nietzsche and Ian Stewart share the keyboard duties and Brian Jones plays a whole variety of instruments including an Appalachian dulcimer on "Lady Jane".

''Aftermath'', first released on 15 April 1966 by Decca Records, is the fourth British studio album by The Rolling Stones. It was released in the United States on 20 June 1966 by London Records as their sixth American album. The album proved to be a major artistic breakthrough for The Rolling Stones, being the first full-length release by the band to consist exclusively of Mick Jagger/Keith Richards compositions. ''Aftermath'' was also the first Rolling Stones album to be recorded entirely in the United States, at the legendary RCA Studios in Hollywood, California at 6363 Sunset Boulevard, and the first album the band released in stereo.

The album is also notable for its musical experimentation, with Brian Jones playing a variety of instruments not usually associated with rock music—including sitar on "Paint It, Black", the Appalachian dulcimer on "Lady Jane" and "I Am Waiting", the marimbas (African xylophone) on "Under My Thumb" and "Out of Time," harmonica on "High and Dry" and "Goin' Home", as well as guitar and keyboards. Much of the music was still rooted in Chicago electric blues.

In August 2002 both editions of ''Aftermath'' were reissued in a new remastered CD and SACD digipak by ABKCO Records. - Wikipedia